The Wabbit asks for Directions 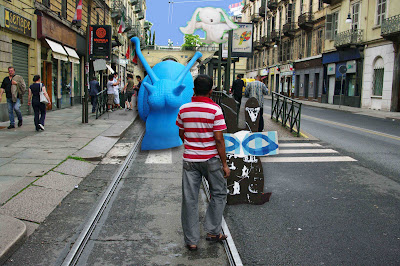 The Wabbit, the Snail and Ghost Bunny set off through the city. Now all three were wondering what to do next. "I want to be entertained," said Ghost Bunny. "Me too," said the Snail. "I find the city very entertaining as it is," said the Wabbit. "But we could perhaps approach a denizen of these parts and ask him for recommendations." "I like denizens!" said Ghost Bunny and fluttered about in excitement. "You speak, Mr Wabbit." said the Snail. "You seem gifted in that department." "Oh, all right," said the Wabbit. "Excuse me, man with striped shirt!" The man was in a hurry for his tram, but he paused briefly and looked directly at the Wabbit. "How can I help you, Wabbit?" "We seek entertainment, my good sir," replied the Wabbit. "What might you suggest?" The man stood and thought and he looked at the Snail with interest. "Proceed along this tram route," he said, "and you will come to a big square. There will be a free concert there later." "Free?" asked the Wabbit just to make sure. "Gratis," said the man. "Thank you so much," said the Wabbit and raised a paw. The man shook his paw gravely and with a sidelong glance at the Snail, he departed. The Wabbit turned to his friends and grinned. "Shall we proceed?" he said. "Directly!" said the Snail and Ghost Bunny.