The Wabbit: Walking with the Big Blue Snail 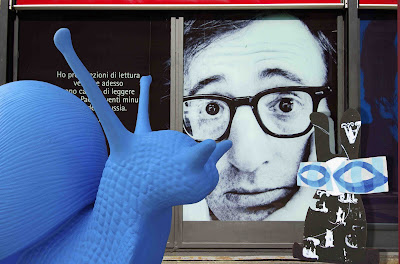 The Wabbit and the Snail drifted through the grid of streets that lay behind the Piazza Carlo Felice. " I do see what you mean," said the Snail. "There is much to learn about natural history on the street." "What have you noticed?" asked the Wabbit encouragingly. "All these people, they go hither and thither," said the Snail. "And so shall we," said the Wabbit. "Look! Here's my favourite bookshop." The Wabbit and the Snail looked at the man in the window for a long time. "He needs cheering up," said the Snail." "He is a film director and makes comical yet ultimately depressing films." said the Wabbit knowledgeably. "Give me an example," said the Snail. "OK," said the Wabbit. "Here's a line from one of his films." The Wabbit struck a dramatic pose. "The hideous lonely emptiness of existence. Nothingness. The predicament of wabbits forced to live in a barren, godless eternity like a tiny flame flickering in an immense void with nothing but waste, horror, and degradation, forming a useless, bleak straitjacket in a black, absurd cosmos." The Wabbit slapped his sides and convulsed in helpless mirth. The Snail was silent for nearly ten minutes. Then suddenly he smiled. The smile turned into a giggle, the giggle turned into a full blooded laugh and then his shell began to shake. "Here's lookin'' at you, Wabbit," said the Snail.