The Wabbit in the Misty Churchyard 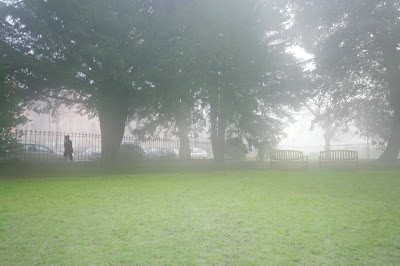 It was misty the following morning and the Wabbit hopped out to the churchyard. It was his very favourite place to consider events and make decisions. The Wabbit crouched in the grass and considered his mission. Although he didn't have a detailed description, he was already making many preparations and altering his list accordingly. As he peered through the mist, he made out a figure who appeared to be running. "A jogger." thought the Wabbit and smiled, because wabbits jogged automatically. Wabbit lungs are quite small and so sometimes the Wabbit panted just as much as the joggers in his neighbourhood. "Ms Jogger ..." The Wabbit stopped because sometimes he tried to speak with too many people. Besides, the jogger was already running past at speed. Then just as the jogger was level with the Wabbit she threw a folded up piece of paper with writing on it, right in front of him. The Wabbit noticed it was folded an impossible number of times. It was a secret message! The Wabbit moved forward and carefully nudged it with bis nose. It was importantly important, that he knew. And so the Wabbit tucked it carefully under his fur. "I cannot read this message here. I must repair to a place of safety, " thought the Wabbit. "There, I will read it in comfort." And the Wabbit loped home casually as if nothing had taken place. Nothing whatsoever.
at January 20, 2011