The Wabbit and what the Wabbit knew 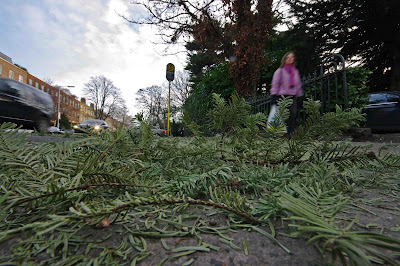 The Wabbit was back in his neighbourhood. And he knew that sooner or later he would run into some obstruction or other. The Wabbit also knew this particular obstruction meant that the festive season was over. "I had a good break and now obstructions don't mean so much to me," thought the Wabbit, "with the possible exception of snow." Anyway, the Wabbit had too many things of too much importance on his list for old Christmas trees. And besides, he had to admit that he kind of liked the smell of the pine needles. So the Wabbit realised he knew a lot of things that made life easier for the Wabbit. He could just hop on his merry way, because the most important thing the Wabbit knew was that he was a natural born wabbit. The Wabbit knew he always mistook the words of one of his favourite songs but he sang them anyway as he hopped over the branches. He sang them at the top of his wabbit voice. You make me feel/ you make me feel/ like a natural born .... wabbit.
at January 11, 2011