The Wabbit and the New Year Roman Candle 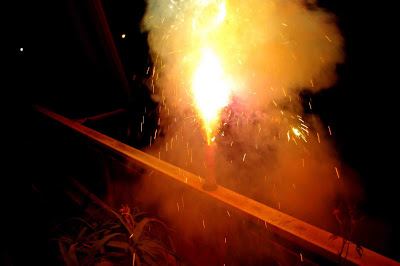 The Wabbit returned to his lodgings, hoping his secret stash had been delivered promptly and in time for midnight. And there they were. Roman candles. He read the strangely-written instructions which said “Light the blue touch paper and run away very quickly”. With one eye on the clock, he flicked his emergency lighter and then the Wabbit turned and ran like the fastest wabbit in the land. Zig-zag, zig-zag went the Wabbit and then he leapt onto a handy ledge. For what seemed like an age, nothing particular happened and the Wabbit hopped from one leg to another impatiently. He was certainly not going to investigate. Not the Wabbit. Then came a splattering and then a hissing and then a rumbling ... and then there was the most enormous kaboom, which startled the Wabbit and he jumped into the air at least a metre. Sparks flew everywhere as the Roman Candle threw sparks in many directions. “Good grief! I should have expected that really,” thought the Wabbit. Then he smelled a strange smell. He had singed his fur. Just a tiny little bit. “I shouldn’t be allowed,” murmured the Wabbit with a mischievous grin. “I just shouldn’t be allowed at all.”