The Wabbit speaks with his friend, Antiquicat 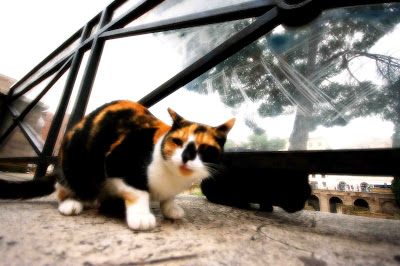 The Wabbit was puffing and panting as he screeched to a halt in Largo di Torre, Argentina, where his friend, Antiquicat, had care-taking duties. "Question, question, question Antiquicat," puffed the Wabbit. "Should I relocate to Rome? What's it like to live here?" The cat looked at the Wabbit in a critical but affectionate manner. "Stress out, Wabbit. What's the rush? I have been here many years and this place I look after is two thousand years old, give or take a hundred or four." The Wabbit paused and sat quietly. And the more he sat quietly, the quieter he became. Perhaps he had acted hastily. "You mean it will be just the same, when I return?" "Yes Wabbit, more or less. And you have your path to hop. Many things on your list remain outstanding, don't you agree?" It was true, thought the Wabbit. Everything the cat said was true. There were things to do, things that were importantly important. They could not be left on a whim. "I'll have once last look around and be on my way then, " said the Wabbit. And dodging bits of dried cat food, he hopped past the tourists. Antiquicat watched the Wabbit until, eventually, he disappeared out of sight somewhere along Via Corso Vittorio Emanuele II.
at January 07, 2011