The Wabbit receives an important Message 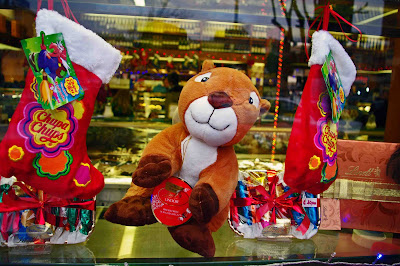 The Wabbit was minding his own business when suddenly he knew he could feel eyes boring into the back of his head. So quick as a flash the Wabbit turned around. It was a squirrel in a window. “I am the Squirrel in the Window,” said the squirrel, superfluously. And he rapped the window three times with his paw to make his point. “Indeed,” said the Wabbit. The squirrel continued. “I have a message from the Chief Wabbit of Galloway.” Now the Wabbit was surprised, and he prided himself on not being surprised. “What is the substance of the message,” said the Wabbit who could be pompous if startled. “Chief Wabbit says don’t forget it’s Hogmanay. The start of the New Year is nearly here.” “Thank you squirrel,” said the Wabbit, slightly ashamed of his poor manners. “Thank you very much. I must proceed forthwith. Forgive me for what you are about to see.” And then the Wabbit binkied high in the air and when he landed, not too far away, he started to cartwheel and as he did he shouted “Hogmanay” at the top of his voice. And the Wabbit got faster and faster and faster. Soon, the squirrel lost sight of the Wabbit and he smiled as he shook his head. “Silly Wabbit,” said the squirrel.