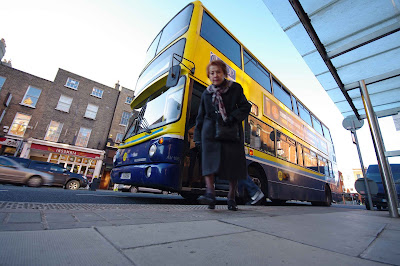 Through diplomatic channels, the Wabbit had heard that he would shortly be sent on a mission. As to the exact nature of the mission, the Wabbit did not know. The only thing the Wabbit knew was that it would be far, far away. As the Wabbit was hopping home, he felt it would be useful to assess his transport options. "This looks like a serviceable vehicle," thought the Wabbit. "But is it going in the right direction?" The Wabbit spoke loudly to the passenger leaving the big bus. "To where does the big bus go, my good woman?" The woman looked all around before she eventually looked down. "Hello," she said kindly. "I don't rightly know. I only know it takes me from where I used to be, to where I am now." The Wabbit thanked the woman but he needed more information. "Does it go to the place where the great wing-ed flying buses leave?" The Wabbit wondered whether he had phrased that correctly. "That is a different bus and it leaves from a different place. I will show you if you like," said the woman. And no-one saw them both disappear as they hopped off together.
at January 18, 2011