The Wabbit considers the Road Ahead 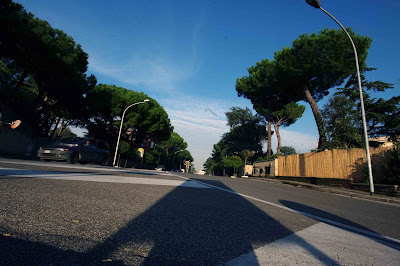 The Wabbit had been delayed. Owing to the detection of his emergency lighter, the Wabbit had not successfully passed security. So he had to stay a little longer. He did not mind and he gazed at the road ahead. "I wonder," thought the Wabbit, "what it would be like to stay around here." He considered the merits. There were excellent salad sandwiches, efficient and amicable treatment in eating places and plenty of new streets to explore. There seemed to be, all in all, good wabbit facilities and a pleasant enough atmosphere. But the Wabbit had work to do. He knew his list wouldn't go away just because he relocated. He wondered if he could get a second opinion and since now he had some time, the Wabbit loped off in the direction of the arrow. He could lope very fast indeed if in the mood. The day was sunny, and the Wabbit took to the bus lane. It wasn't very long before the Wabbit picked up speed and was whizzing along. The Wabbit was just a streak of lightning and so no-one saw him go - only a single motorcyclist on a red Ducati. The motorcyclist merely inclined his head very slightly. And so did the Wabbit.
at January 06, 2011