The Wabbit reviews his Year 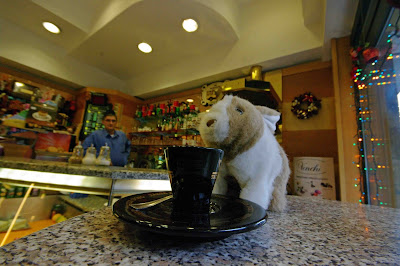 The Wabbit felt the need to think over the events of the previous year. That called for a strong beverage, which the Wabbit had duly arranged. And what a year 2010 had been for the Wabbit! The Wabbit had met many new friends. He had safely survived the perils of the balcony. He had conquered rain and leaves and snow. He had been given a lift in a chocolate car. He had battled wabbit exclusion and been invited to contribute to wabbit affairs on the European Committee of Experts. He had taken part in the Great Wabbit Homecoming. And what about his rescue of an oppressed wabbit and his subsequent and abrupt dismissal of the sinister agents of Rabit? Then he recalled he had successfully negotiated the special launch of Lagomorph Lager. And, somewhat to his embarrassment, he had been sung about by young musicians. After all that, the gifts of the Giantess and his well-deserved holiday was merely icing on the cake. All the same, there were many outstanding items on his list. And the list only got longer. “I will have to put my list on the list!” The Wabbit chuckled. And so did the waiter behind him.