The Wabbit goes shopping in the Big Department Store 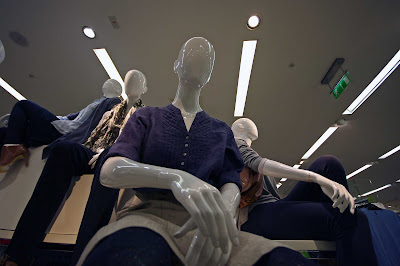 The Wabbit had gone shopping. He had found he no longer had room under his fur for the many items he would require for his mission. His fur was already bulging in an unsightly fashion that the Wabbit disliked. So the Wabbit had hopped out to find a small rucksack of a suitable size for a wabbit. But the recent message about his adversaries continued to make the Wabbit very alert indeed. So when the Wabbit arrived at the bottom of the escalator, he nearly jumped at the sight of the people with no faces. The Wabbit hopped quickly up to the mirror to see if his face was still the way it was. He peered for a while until he was satisfied that no change had taken place. His wabbit face still stared back at him. The Wabbit stuck his tongue out just to make certain. All was well. "On the other hand, " thought the Wabbit, "a change in style wouldn't hurt." The Wabbit smiled at the thought and went on his way, but he had the most uncomfortable feeling that the faceless faces were somehow watching him. "That's just paranoia," said the Wabbit to himself. And he hopped onwards in search of the Bags for Small Mammals Department.
at January 23, 2011