The Wabbit and the Sitting Duck 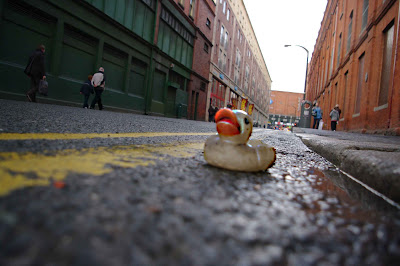 Following his interesting discussion with the Cat Upstairs, the Wabbit had been reading Sun Tzu's Strategy for Wabbits. So now he knew he should gather information and know his territory. The Wabbit had thought about it and he had decided this was importantly important for the Wabbit. So the Wabbit hopped a little further than he normally would. The day was damp and the walkers and the shoppers and the tourists were huddling in corners. They were so uncomfortable they never noticed the Wabbit. "Today it's my job to notice things," said the Wabbit, to no-one in particular. At that very moment he spotted the duck. Now the Wabbit knew it was a false duck, but how had it arrived there? Had it floated there from the nearby toy shop? Had it been thrown from a pram by a disgruntled child? The Wabbit decided it was a sign and he made a mental note. "This duck is far from its natural habitat. Unable to cope it has come to a standstill. Now it's a Sitting Duck!" The Wabbit chuckled and looking around to see if anyone had noticed, he addressed the duck. "Hey Duck, you could have been a contender. But now, you're all washed up." The Wabbit smiled grimly and suddenly vanished, leaving only the faint trace of his 28 teeth.
at January 17, 2011