The Wabbit and the Pizzini 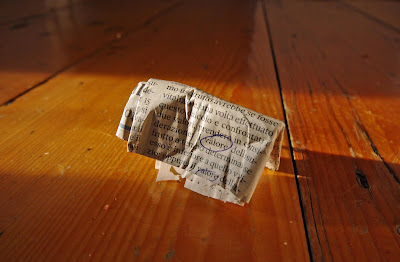 The Wabbit examined the folded up paper intently. He knew what it was and he knew where it came from. The method of communication was well known to the Wabbit. It was a pizzini. Now that made the Wabbit cautious, because only secret people used a folded-up bit of paper to carry a message. Worse still, the recipient was expected to read it, decipher the secret code and then eat the pizzini in its entirety. And the Wabbit just hated the taste of newsprint. The message had come from a group of aristocratic Wabbits that lived in the Dolomite Mountains near the Swiss border. It had heard that the agents of Rabit, a rather sinister and unpleasant organisation, had not lost interest in the Wabbit. The message alerted the Wabbit to Rabit's willingness to frustrate his efforts by any means it could. The message was a Warning. The Wabbit thought for a bit. The source was impeccable. "I shall keep my wits about me," murmured the Wabbit. "I will need to be extra alert." Then just as he thought that thought, a rustling sound startled the Wabbit and he jumped at least a metre in the air. But it was only the paper uncrinkling. "Not that alert," grimaced the Wabbit. And with a single flash of his teeth, he rendered the pizzini into so much confetti. "Yuck" said the Wabbit.
at January 21, 2011