The Wabbit finally arrives at the Store 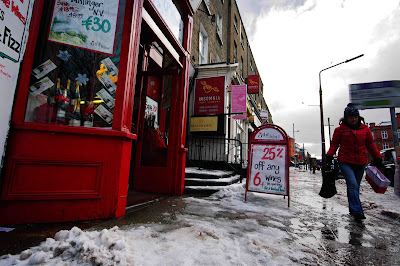 Finally the Wabbit got to the store where the tasting was to take place. Huffing and puffing, he was still complaining through his teeth about the state of the pavements. According to the Wabbit, not enough care was taken of the roads. They were invariably dirty and when there was bad weather, they were just left in a poor condition and wabbits had to fend for themselves. The paws of wabbits not only became matted, but fell victim to small cuts which could only bring infection and sickness. The Wabbit's complaints went on and on and on until the Wabbit himself realised that he could not control everything. All at once the Wabbit recognised he was spoiling his own fun. Had he forgotten the Lagomorph Lager and the anticipated tasting?. "OK, OK" said the Wabbit, "This is the right place. Bring on the Christmas cheer." And then the Wabbit smiled to himself. And his smile revealed every single one of his 28 teeth and they gleamed in the light from the store.
at November 30, 2010