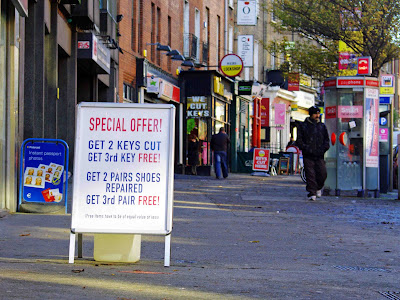 The Wabbit was delighted to reach a leaves-free area. Although it seemed very quiet indeed, he much preferred his own neighbourhood, if the truth be known. All this gallivanting around spook territory had quite worn him out. Concerns had been expressed about the state of the Wabbits's paws with all these leaves and the constant flooding in the streets. So the Wabbit had actively considered footwear - even if was unusual for a wabbit. The Wabbit therefore looked at the sign with interest. But he had no shoes to repair, far less three. Three pairs would be greedy, thought the Wabbit, because he knew there were many mammals with no shoes at all. Perhaps if he just took his paws to the man in the shop, something could be done. Something appropriate. Something made to measure. Or maybe he could just wait for better weather. He looked at the signs again and he decided there was nothing he really needed. He didn't need keys (he tittered at the thought). He could probably do without shoes really. And what possible need could the Wabbit have for photographic prints? "Someday my prints will come!" grunted the Wabbit to no-one in particular - and he made that snickering noise through his teeth.
at November 10, 2010