The Wabbit meets some Unsavoury Elements 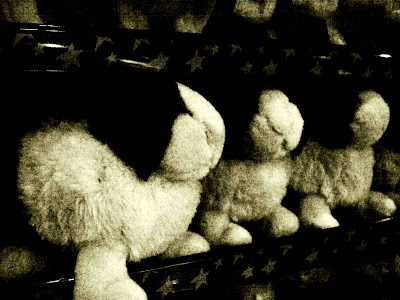 On the Wabbit's list was a visit to the Big Toy Store to assess the social exclusion of wabbits. But he had no sooner approached the displays when he heard a tinny voice. "Hey Wabbit!". The Wabbit could not believe his ears and he thought "Whatever next?" The tinny voice persisted. "We are agents of Rabit. The Rapid Border Intervention Team. We demand that you produce your Certificate of Existence." The Wabbit was naturally a good natured sort by nature. But he could feel his temper getting a little frayed round the edges - especially after the skeleton incident. "Now look sunshine", he growled. "I have limited patience. Take your stooges and be off with you." "And if we don't?", sneered the agent of Rabit. The Wabbit had already assessed the situation. "I have friends here and they are becoming restless. They are global mammals and they don't hold with borders. The wallabies especially don't feel the need for certificates to prove they're here." The Wabbit could hear a stomping of marsupial feet from behind him, so he paused for effect. "Oh stay if you like. Make their day!" But before he had finished the agents had vanished into thin air. The Wabbit smiled to himself and glanced over his shoulder - and saw several wallabies taking off their boxing gloves in a disappointed fashion. The Committee of Experts would hear of this. Of that the Wabbit was certain.
at November 04, 2010