The Wabbit meets the Firefighters 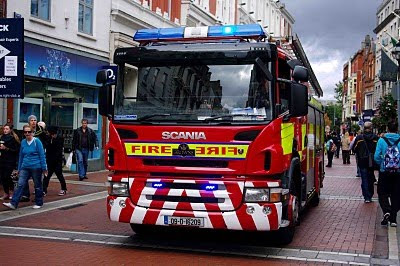 On his journey to town, the Wabbit kept to the edges - except here where it was difficult (but not impossible) to be incognito. As he headed round the corner, keeping his ears down and his eyes wide open, he noticed a wonderful beast. It was bwight red and there were flashing lights. "Ooh", said the Wabbit. "I would love to ride in that fire engine and scale the great ladder." But there didn't seem to be a fire. The Wabbit was glad about that, but at the same time he felt he had missed all the fun. And just as he was thinking about it, a fireman looked down at him and gave him a cheery wave. The Wabbit was delighted. He binkied slightly and did that funny thing with his ears. But then he was puzzled. "No-one usually sees the Wabbit", he thought.
at November 11, 2010