The Wabbit bumps into a Random Bale 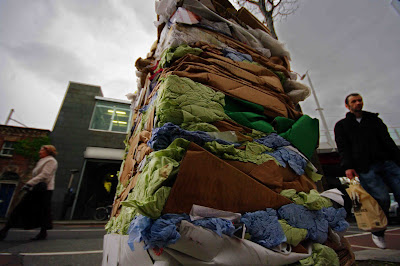 The Wabbit was determined to sort out his list and decided to go on a longer walk around to visit adjacent neighbourhoods. He was convinced that this would give him fresh ideas. But no sooner had he ventured into new territories, than he ran into a big bale in the road and bent his ears back (and to the sides). "What the binky-bink!" said the Wabbit. The Wabbit did not expect bales of rubbish at the traffic lights. And certainly, the Wabbit was very, very reluctant to put any more matters on his list. He had plenty of things to deal with and no help whatsoever from other lagomorphs. I shall have to let this one slip, thought the Wabbit. "This time", said the Wabbit, "I didn't see anything. I was never here and even if I was, I was asleep." So the Wabbit hopped off quite quickly. And in any case, no-one ever saw the Wabbit.
at November 16, 2010