The Wabbit becomes concerned about his Environment 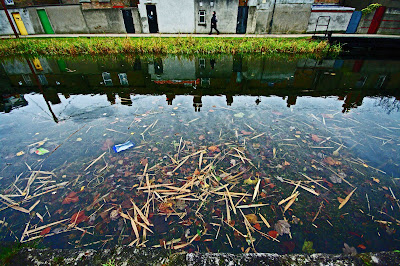 The Wabbit paused by the canal bank at a spot that was not far from the site of his proposed headquarters. He had expected to find the water in better condition since it also flowed through his very own neighbourhood. But this was upstream and the poor canal seemed rather forlorn. Naturally the Wabbit had no thought of putting this matter on his list because his list was quite lengthy. And he knew that a struggle against one's wabbit environment is the most difficult to win. "If this is near my proposed headquarters, then I may review the position." murmured the Wabbit. After all, what would the Wabbit say to his esteemed guests? (In reality the Wabbit hadn't actually anticipated any guests until now.) Well, thought the Wabbit, "I could tell them it was just a temporary blip. Or that it was some other wabbit's fault. Oh I know, I might just tell them it was like that when I got here." The Wabbit thought long and hard. "No," thought the Wabbit. "I just can't do it." Then with a sigh of enormous reluctance, the Wabbit wrote "environment" on his list.
at November 22, 2010