The Wabbit and the Strange Box in the Street 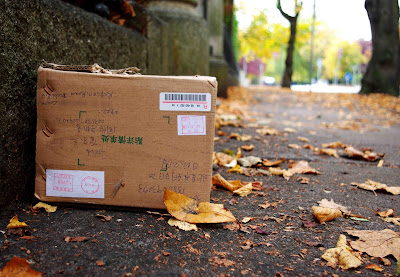 The Wabbit was flabbergasted, but not for long. This was close to home and as long as the Wabbit had lived in these parts, there had always been strange things left in this street. But this was different. A package from foreign parts had been tossed aside. What if someone had dropped it? What if there was something in it? What if it was, in fact, intended for the Wabbit (but heavily disguised for secrecy). The Wabbit approached the parcel and nudged it with his nose. It sounded empty but that didn't mean much. It could be a soft toy or handkerchiefs. On the other hand it could well be be something very sinister sent by the agents of RABIT. The Wabbit had crossed paws with RABIT before, an unpleasant organisation with significant powers and unsavoury methods. Suddenly a gust of wind sent the parcel skittering down the road and into another street. "Out of my jurisdiction", murmured the Wabbit with relief. And nonchalantly whistling between his teeth, he proceeded home.
at November 24, 2010