The Wabbit meets an Obstruction 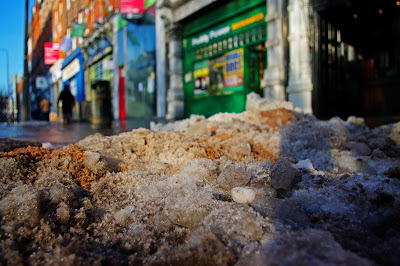 The Wabbit hopped towards the shops even though his neighbourhood was caught in wintry conditions. He had heard through his network that there was special beer available that was suitable for wabbits. He was not so keen when he heard it was called Lagomorph Lager. But he thought he had better give it a chance. No-one would see him if he slipped in to one of these very ritzy tastings that the store put on from time to time. The door was always open and, being a wabbit, he just couldn't help hopping in and poking things. Up to this point the Wabbit had found it easy enough to negotiate the slippery streets but the Wabbit suddenly found his way obstructed. "I'm going to miss the tasting", thought the Wabbit. "Oh no. This is always happening." And the Wabbit moaned and groaned and moaned until he felt quite exhausted.
at November 29, 2010