The Wabbit assesses the Weather (unfavourably) 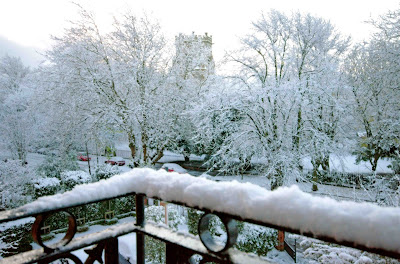 No-one ever saw the Wabbit and that was both good and bad. It was why the Wabbit was always tentative on the balcony because he knew that sometimes the shutters would close and he would be stuck. It would be rather cold to be stuck there, but anyway he pushed himself up onto his hind legs for a good look. "Winter Wonderland" murmured the Wabbit with a note of sarcasm. Although the Wabbit was perfectly familiar with snow, he could take it or leave it. The Wabbit admitted to himself that, for preference, he would leave it. It hampered his movement, impeded his tasks and it did something funny to the light. Nevertheless, the Wabbit resumed his surveillance. Nothing was moving - not people, not cars, not even small mammals. "I don't care", thought the Wabbit. "I will go out and it will be quiet. I shall move carefully in a slight quirky loping gait. And no-one shall see me slide in the snow." And that's exactly what the Wabbit did.
at November 28, 2010