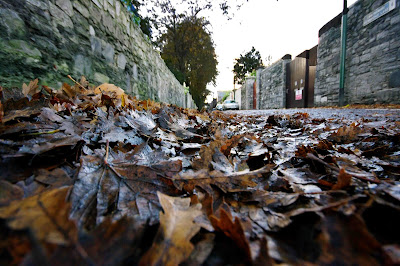 The Wabbit was rather pleased with the way in which he had disposed of the agents from Rabit. But as he made his way home he was riled to see something that he felt had been remedied. This had been on his list, but had been crossed off. Or so the Wabbit thought. "Accursed leaves" said the Wabbit. "They have not been removed as agreed - and now they've gone soggy." When the leaves turned into a sodden mass, wabbits were mightily inconvenienced. The slimy mass attached to their paws so they were delayed in going about their wabbit business. As far as the Wabbit was concerned the leaves were toxic, pestilent even, in this state and it was the duty of the powers-that-be to remove them. The Wabbit thought about direct action but there were more pressing matters to attend to. And so the Wabbit hopped high and only touched down lightly on the offending vegetation as he made his way home.
at November 09, 2010