3. The Wabbit and the Lamp's Message 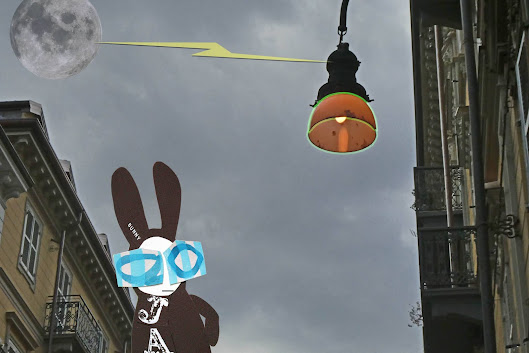 The Wabbit was on his way home when he heard a hissing. He looked up. "That streetlight must be out of order," he thought. But with a faint flash, the light illuminated with a phosphorescent glow. "Halloween is past," said the Wabbit and he shook his head. "Wabbit!" The voice was familiar. The Wabbit struggled to place it. "It's Lamp," said the voice, "I can see you. I'm calling you from the moon." The Wabbit looked up and imagined he could see a glow on the moon. "Lamp!" he said. He looked round just in case anyone saw him talking to himself. Lamp's voice carried on. "I'm communicating with you through one of my kind." The Wabbit shrugged. He'd left Lamp on the moon because he seemed to like it but hadn't expected him to get in touch so soon. "OK Lamp. What gives?" The glow faded and brightened again. "I can't keep this up for long. Clouds you know. Interfering with communication." "Give me the gist," said the Wabbit. "I've been receiving strange calls," said Lamp. "But nothing comes of them." The Wabbit stared at the moon and tried to visualise Lamp. "Same here," he said. "I'm supposed to sort it out, but I can't find the source." The Lamp continued. "I tracked it down. It's coming from the top of the Mole Tower." The Wabbit was sceptical. "Didn't come up on our radar." The Lamp snickered. "They're photo encrypted and decrypted somewhere near Superga." The Wabbit nodded as if he knew that already. "Good info Lamp, anything you need?" "A new bulb would be nice," said Lamp, "You can send me one, they're quite light." The Wabbit laughed and the green glow flickered and died.