5. The Wabbit and the Euclidean Mob 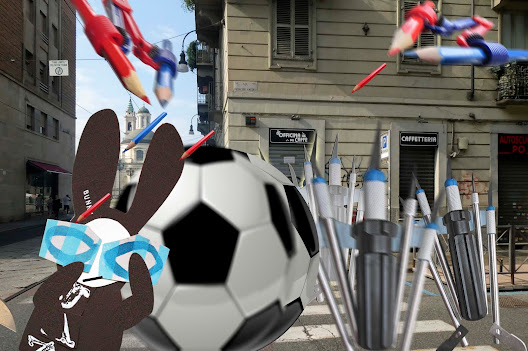 The Wabbit was on his way to a strategic planning meeting to discuss the contents of his dream. In fact, they all were - but the Wabbit was first. He got up early and proceeded along Via Accademia Albertina with speed. But just as he got past Piazza Carlo Emanuele II he met with the advance guard of the Euclidean Faction - they were sharpies armed to the teeth and as noisy as a cave of bats. The metal knives clacked together like an angry medieval mob. Planes fired a series of sharp pencils at his ears. Worse still they launched a football from their midst. The Wabbit knew deep down in his gut that the football was more than that. "A bomb more than likely," he thought, and he took to his heels. But the faster he scampered, the faster they went. He kept his eyes on the front. To his relief he saw Wabsworth and Lapinette running towards him. They had a grappling device and were ready to throw it across the road. The Wabbit thought fast. It would take care of the sharpies but not the planes. He heard the familiar sound of a biplane. "Susan!" Everything seemed to be sorted - but could he get away in time? There was nothing left but to dive on top of the ball. Bomb or not, he had little option. He jumped astride, waving everyone away. He sailed past Wabsworth and Lapinette then jumped from the ball. It carried on until the open space of the skateboard park. He heard a crump, saw the flash. He was relieved. "No skateboarders this early," he shrugged. The stinger hit the road. Netting descended on the planes. "So far so good," thought the Wabbit.
at November 30, 2021