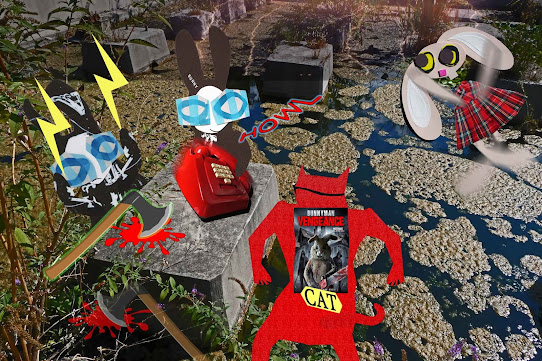 Nothing could interfere with the team's Hallowe'en Party and they found a particularly messy part of Pluto Park to host it. The Wabbit brought the red phone - since his new adventure was about irritating calls. He placed it with great care on a concrete block. Lapinette fluttered over the water like a dragonfly. No-one was quite sure how she did it. Wabsworth caused lightning flashes to erupt from his paws. Since he was an android it was nothing for him to organise. Skratch was late and he stood up to his knees in the murky water. "OK Wabbit. What's your Bunnyman trick this year?" The Wabbit smiled. "No trick. It's never a trick." Lapinette cackled heartily and floated back and forward. Wabsworth's lightning flashed. "Here comes the Bunnyman," he screeched. At that moment the telephone howled. The Wabbit scowled in response. "It only does that when it's important." Lapinette fluttered. "You'd better answer it then." The telephone vibrated until it was in danger of falling from the concrete block. The Wabbit lifted the receiver. They heard the sound of footsteps. "I'm coming!" said a deep voice. "Who's calling?" asked the Wabbit. "Who do you think?" shrieked the voice. "It's the Bunnyman," said the Wabbit. His voice shook. The phone spoke again. "I sent you my axe." They gaped in horror as an axe rose from behind the concrete block. Blood spattered right to left. Wabsworth lifted his paws towards the heavens. They sparked again.  The axe faded from sight and the blood disappeared. "Holography," he laughed. "But who was on the phone?" asked the Wabbit. "Not me," shrugged Wabsworth.
at October 31, 2021