4. The Tipsy, Fitzy and Mitzy Intercept 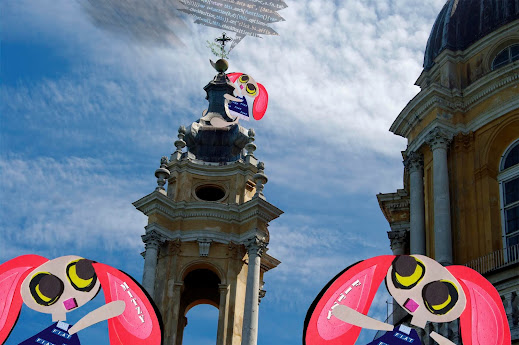 Lapinette's personal guard were allocated the task of finding the photo decrypter but what they found was a robocall device. It was sending out nonstop signals from the bell tower at the Basilica. "It's not so high, I'll take it down," said Tipsy. She plucked an edged weapon from her frock and clenched it between her teeth. Then she began the ascent of the tower. "There she goes," said Fitzy. "Trouper!" said Mitzy. They both laughed. Tipsy slashed at the strange device. It bleeped and the photo signals became visible. "Gotcha," said Tipsy. but the machine fought back with electric shocks. "Fudge!" said Tipsy. She changed her position on the tower. "Need a helping paw?" asked Fitzy. Tipsy thought about it. "Yup," she said finally. Fitzy scrambled up and got a grip of Tipsy. Then Mitzy did the same. She grabbed on to Fitzy. They swayed around like a drunken concertina. "It's gonna self destruct," yelled Tipsy. "Sheeps' shiblets!" shouted Fitzy. "Jump!" yelled Tipsy. "Mother trucker!" yelled Mitzy as she let go and dropped. Together they slid down and lay in a heap. They had cuts and bruises and frocks were tattered. "Jerk water!" cussed Fitzy and put her paws over her ears. With a loud bang the device detonated. Stonework fell around their shoulders. Some time elapsed. "What do we tell the Wabbit?" said Mitzy. "I'll kick his corn nuts!" shouted Tipsy. Fitzy giggled. Mitzy snickered. "And then?" Tipsy thought about it. "Let's find the key device on our own." Tipsy paused. "I think I know where it is and who has it." Fitzy fished in what remained of her frock for her automatic. "We'll get that loompity frigstick!"