6. Tipsy and the Devil behind the Calls 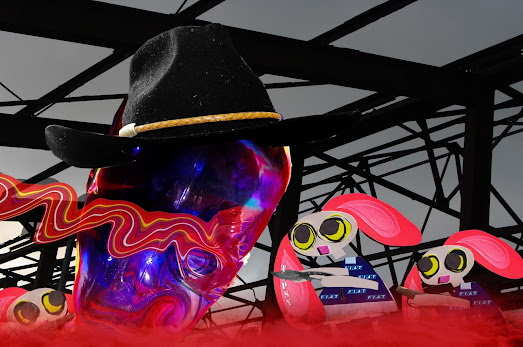 Out at an abandoned factory on the edge of town, Lapinette's personal security detail Tipsy, Fitzy and Mitzy rounded a corner. "There he is," murmured Tipsy. "I knew it would be him - and I knew he'd be here." Fitzy was taken aback. "I'm blabbergasted. He looks rather devilish." Mitzy scoffed. "I don't believe in the devil." The Devil had his back to them, and he stood up to his waist in a sea of blood. Tipsy drew her edged weapon and hissed. "The devil's real enough. There he is. Beelzebub himself."  The Devil's lips curled. "Personally in person, little female rabbit. Some call me that. I prefer Lucifer." He looked askance at their weapons. "You cannot harm me. I am a supernatural phenomenon." Mitzy growled. "You've been causing a lot of trouble, you fiend." "A fiend indeed. And I'll cause more," said the Devil. He drew his Hellish lips back in a sneer. He stirred blood with his finger and painted an upside down cross on one of the wooden beams. "Now it's a crossbeam. Ha ha ha." He laughed a sinister laugh. Tipsy made the sign of a cross with her edged weapon. "Stop making annoying calls," she snarled. The Devil laughed. "Don't be silly small rabbit. I have enormous resources. I'll make as many calls as I like. All day all year. I'll wear you all down. Until you join with me." "Pipe down, Hobknocker," said Tipsy, "I'll send the Wabbit after you." For the first time, the Devil looked perturbed. "The Wabbit?" He began to fade. "We'll see about that." But he was frowning. He faded until only the frown remained and the frown spoke. "I have a score to settle with that lagomorph."