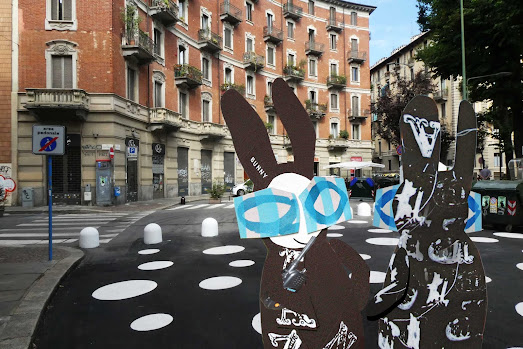 The Wabbit bumped into Wabsworth near the Mole Antonelliana. He was merely standing and considering what all the white circles were for. He'd never come across a junction like it. "Wabsworth," he said, "You're just the rabbit I need to speak to." Wabsworth smiled. He was always pleased to bump into the Wabbit. "I was making my way between the River Dora and the Po. Just hopping aimlessly." The Wabbit thought Wabsworth might know about new traffic schemes, and he asked him. "What gives here?" Wabsworth was an android. He was fiercely logical but not without humour. "It's sending me round in circles. I think it's a plan to separate pedestrians from traffic. The Wabbit smirked. "It seems a roundabout way of doing things." Wabsworth laughed. I was nearly knocked down trying to work it out." Both shook with mirth. "Town Council!" They said it at the same time and laughed even more. Then they stuck their paws in their fur. "Any word from the Department?" asked Wabsworth. The Wabbit shook his head like a donkey. "Not a sausage. I was hoping to hear of a mission." Wabsworth said "Ha! They'll circle around us before they announce it." The Wabbit considered then replied. "And then we'll be running in circles." They guffawed a lot. "I suppose we'd better circle the wagons!" said Wabsworth. The Wabbit knew Wabsworth watched too many Westerns. He grinned. "We'd better contact our immediate circle."  The Wabbit ran out of jokes. Just then his radio crackled from deep inside his fur. "Must be the Circle Gang."
at November 18, 2021