5. The Wabbit and the Big, Big Tower. 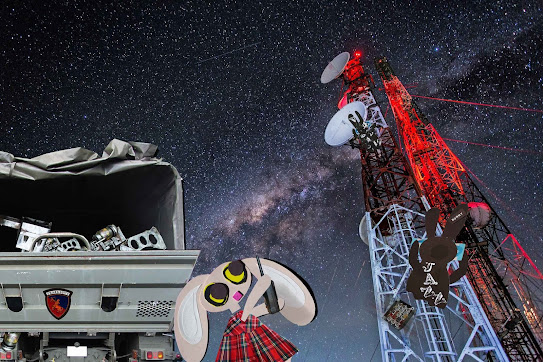 The Wabbit knew all about the Superga events. He was monitoring the signals and picked up a flash. It was instantaneous but he was able to ping it. The address was a telecommunications tower on the edge of town. "Let's go," he yelled. "Bring truck, bring guns!" Lapinette took the driving seat and Wabsworth dived in the back. In 30 minutes, they were at the site. It was a lonely location where no-one ever went. Just a field, and a tower and the hovering stars. Wabsworth started to climb. "What am I looking for?" The Wabbit started after him. "A device, we'll know it when we see it." Lapinette remained by the truck and shouted directions. "The dish to your right, Wabsworth." Wabsworth scrabbled around. "It's a device. It's buried." Lapinette replied immediately. "Kin you unbury it?" The Wabbit was nearly there. "Hang on Wabsworth, I can see an edge." He pulled at a strange box. "It's in two bits, like a jigsaw," shouted Wabsworth. Together they uncoupled it and pushed the pieces in their fur. Despite the ladders and lattice framework, it was a little precarious. A piece slipped away from the Wabbit and clanged its way down the tower. It bounced once, twice, three times - before Lapinette dived and caught it. What it was exactly, no-one knew. She clutched it close. "I have the thing." By the time Wabsworth and the Wabbit were at the foot of the tower, the box was safely stowed in the truck. Lapinette poked it with screwdriver. It flashed once then spoke. "You'll never ever find me." Lapinette smiled a grim smile. "Don't count your eggs and your chickens."
at November 05, 2021