6. The Wabbit stops off at the Moon 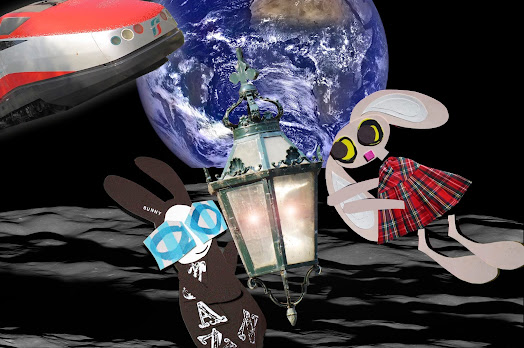 At the Lamp's insistence Quantum dropped him off on the moon. He said he'd been staring up at it for so long, it would be nice to stare down from it. The Wabbit and Lapinette bounced around and tried to get him the best position. "Why don't act as lookout? said the Wabbit. The Lamp beamed. "Nothing gets past me!" Lapinette made a final adjustment. "You don't need a chain to hang from up here." The Wabbit nodded his head. "Or a lamp standard." They all bounced together. "You'll be able to see Torino," said the Wabbit. "And they will see me!" replied the Lamp. His headlamps became very bright indeed and he flashed them a few times. "Well need to alert the ESA I suppose," said Lapinette. "They won't believe it," said the Wabbit. "Anyway, there's so much ... stuff flying around, I don't think they'll notice." The Lamp flounced. "I thought you were going to say space junk." The Wabbit hung his head because that's exactly what he was going to say. Lapinette had a thought. "You won't feel lonely up here, all on your own." The Lamp shook vigorously. "I have the stars for company." Lapinette thought that was very sweet. "We can have a shining competition," yelled the Lamp. "Mmm. We should get on our way," said Lapinette and she signalled to Quantum. "I'm a train not a taxi," grumbled Quantum. He circled round and came in for a landing. "Come up and see me sometime," said the Lamp. He waved goodbye as he watched Quantum start his journey to Earth with the Wabbit and Lapinette on board. "I'm never going back to that awful place," he said to himself, "No tourists up here. But I think if I look very hard I can see them." He swung his headlamps round until Torino briefly lit up. The lights on the Mole Tower winked back at him. "Missing you already!" he shouted.