4. The Wabbit and a dream of Apple Pies 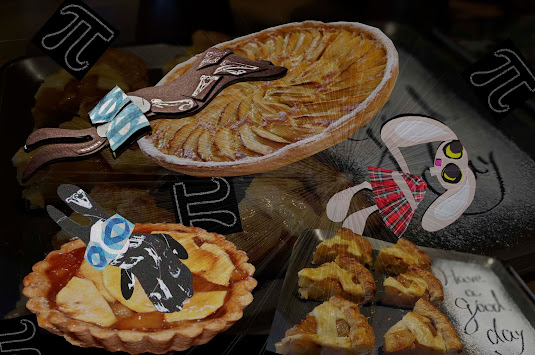 That night the Wabbit had an extraordinary dream. He was floating in Space near one of Jupiter's moons - and there with him were Wabsworth, Lapinette and three apple pies. They each had a pie. Wabsworth seemed the most astonished and he reached out a paw to touch it the pie. He could see Lapinette doing her best to keep clear of the apple. Her antipathy for fruit was well known and her feet flailed around. In fact, she was having the self-same dream. She wrinkled her nose as she saw the Wabbit floating on his back over a massive apple pie. Wabsworth was an android and chanced to use his dreaming sub routine. He found himself stepping in a chunky apple pie which he recognised from the Wabbit's memory banks. He prodded it. It was then he noticed a familiar symbol, lurking in the background. They all gasped pi at the same time. Pi in the sky!" muttered the Wabbit. Even though it was a dream, he chuckled to himself. Wabsworth prodded the apple again. "Sir Cumference," he laughed. "that's the fattest knight." Lapinette managed to drag her feet clear of the pie. "I draw the line at apple," she said. The Wabbit's mind was working overtime. "Pi repeats itself." He said as much in his dream. Wabsworth and the Wabbit and Lapinette all woke up at the same time. They knew the dream had been telling them something and they got to work with pencil and paper and fancy calculators. Wabsworth made an intuitive leap. "Squaring the Circle!" Lapinette was thinking too. "Pi is transcendental." But it was the Wabbit that got to the answer first. "This is an attack by the Euclidean Faction!" It was well known that the Faction had given up on mainstream mathematics and taken to armed geometry. So it could be no-one else ...