2. The Wabbit and the Attack of the Plates 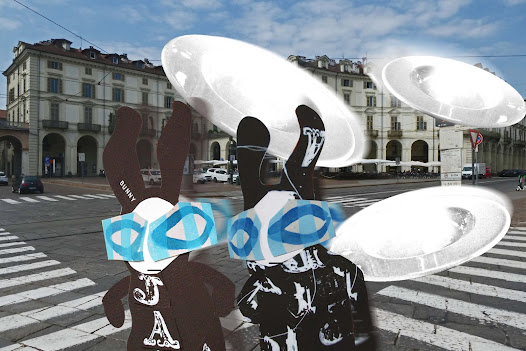 The Wabbit and Wabsworth started to amble down to the River Po when the Wabbit caught a flash of white from behind. At first, he paid scant attention. Then it came closer. "Wabsworth?" he said. "I know," said Wabsworth, "Ignore them and maybe they'll go away." They walked a bit faster, but still the objects came closer. "I think it's the circles," suggested Wabsworth, "they're mobile." Suddenly there were more and they circled round and headed for them. "They don't seem friendly," said the Wabbit. he broke into a fast lope. Wabsworth kept up with him. "They seem like crockery," he ventured. "Deep plates," muttered the Wabbit. He'd been to many a gala dinner and he knew his crockery. One of the plates started to whirl and it came far too close to the Wabbit's ears. "Yikes," shouted the Wabbit. He quickened his pace. The lead plate let out a piercing wail as it whirled faster. The other plates took up the wail. It was deafening. The Wabbit and Wabsworth started to run. "I think they mean us harm," shouted Wabsworth. "As if we haven't got enough on our plate!" answered the Wabbit. The lead plate shouted out loud. "Servings, servings!" They were racing along now but still the plates kept up. "Maybe they're tectonic plates?" said Wabsworth. "They're shifty all right," responded the Wabbit. They veered sharp round a corner. The plates missed the turn and soared into an underground car park. They heard a crashing as the plates dropped down a lift shaft. "That was their own fault," grinned the Wabbit. "I have a Freddy Mercury joke," laughed Wabsworth. The Wabbit offered a quizzical ear. "I want to break three," groaned Wabsworth.