3. Lapinette and the Circles of Confusion 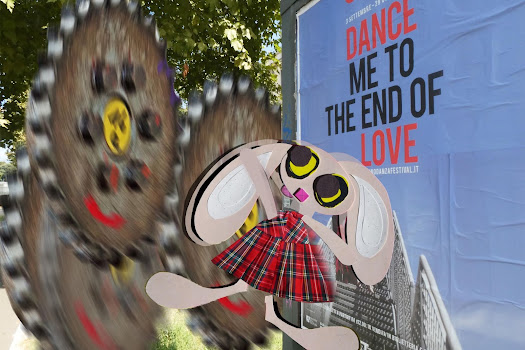 Lapinette made her way along the River Dora, without a care in the world and whistling a happy tune. She turned to look at a poster advertising dance and began to sing the song. "This is quite a happy song for Len Cohen." She smiled to herself. It was then that it happened.  They were the gear wheels from Hell and they came at her in sections like refugees from an old gearbox. There were four of them, each one larger and coggier than the last. She dived in the air and they whistled past her with a whizzing and a crunching.  She flattened against the poster, but the gear wheels proceeded down Via Dora Firenze with speed. "They didn't come for me then." She watched them until they were out of sight. "They must have slipped a cog," she thought, "but that's a matter of a pinion." She smiled and thought she was getting worse than the Wabbit. That was quite a thought. "I'd better follow them." She could just see the gears and the direction they were headed. She took a short cut and intercepted them at Piazza Vittorio Veneto, where they veered to the right and disappeared into underground parking. She heard smashing crockery, then silence. "Curious," she thought. "I'd better find the Wabbit." She didn't have to look far because the Wabbit and Wabsworth were emerging from the far entrance to the underground car park. They were shaking their heads in synchrony. She hopped as quickly as she could and caught up with them. "What's with the flying gears?" she yelled. "Looks like circles of confusion," shrugged the Wabbit.