7. The Wabbit when the Devil Called In 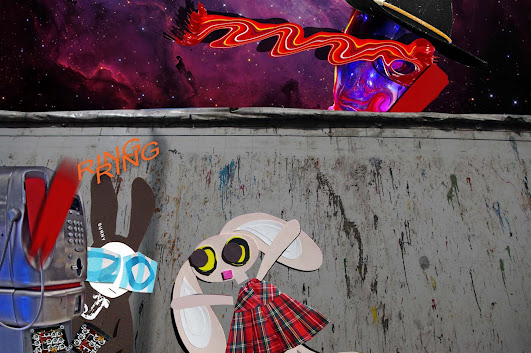 The Wabbit took both boxes and headed for town, but on the way a phone started to ring. It was one of those boxes on the wall and the Wabbit hadn't seen one for years - except maybe in the station. Mobile phones had almost rendered them obsolete. Dring dring. Dring dring. The call was insistent. The Wabbit was still looking at it when Lapinette arrived. "Answer it," she said. The Wabbit was tentative. It vibrated so much it came off the call box and dropped into his paw. Lapinette waved frantically. She pointed towards the top of the wall. The Wabbit answered the call anyway. "Hello," said a mournful voice. "Beelzebub here!" "The Devil you are!" replied the Wabbit. Lapinette was pointing at the wall but the Wabbit took no notice. In fact, he turned his back. "Always the wag. Ha ha. You'll never stop my calls, Wabbit," said the Devil. "They stop here and now," replied the Wabbit. "I have your thingymajig." The Devil laughed. "That's just a simple machine." The Wabbit took both pieces and tried to connect them. "No!" yelled the Devil. "Why not?" asked the Wabbit. He tried again to fit the pieces together. "It will route me and my calls through Gehenna switchboard," howled the Devil. The Wabbit was successful and the two bits slotted together with a click. The phone made a ringing sound like a thousand feedback loops. Lapinette watched as the Devil began to dissolve. "I'll get Moloch to tidy your remains," quipped the Wabbit. The Devil's voice whispered along the wall.  "I won't call again." The ringing sound faded. Devilish pieces liquified and ran earthwards. "Paint the devil on the wall," quipped the Wabbit.