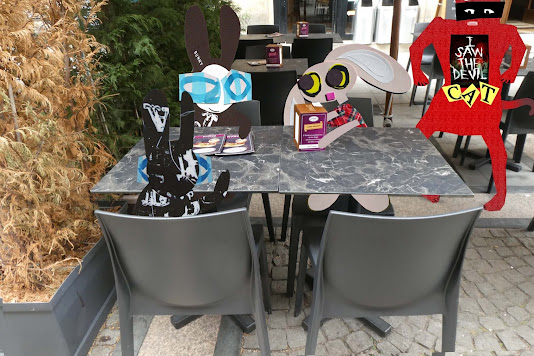 The team gathered as usual in a Caffè they had always ignored.  The Wabbit thought the menu was hideous. Lapinette thought the Wabbit was too critical. Wabsworth didn't care because he was an android and all food was the same to him. Skratch hove into sight, complaining that half his head was cropped from the picture. The Wabbit was adamant and wouldn't move anything. "We need to show the chairs in case anyone from our audience wants to join us." Skratch shrugged and sat down. "So what was that for a kind of adventure?" Wabsworth clapped his paws. "The Devil in literature is a popular motif." Lapinette nodded. "He embodies specific anxieties and desires. Many serious people believe in Satan. He didn't just visit us in a story. He has active agency." Skratch purred long and hard. "He was the Devil, not merely a devil." The Wabbit rapped on the table. "The Devil is a trickster and aren't our stories also a trick?" Skratch was overjoyed. "That's true. Here he appears as a representative of corruption and decay. The spammer to end all spammers." Lapinette was anxious to contribute again. "Yes, and so Satan embodies desire. The audience has a desire for a world different from ours, where the Devil can just show up." Wabsworth had the last word. "The Devil emerges from a network of cultural forces. Evil and good, right and wrong are fundamental antinomies." The Wabbit laughed. "Like having a drink and not having a drink?" Lapinette picked up the napkin holder and made to throw it at the Wabbit. "Be a devil!" she cried. The Wabbit ducked fast ...

[I am indebted to the authors of Giving the Devil His Due: Satan and Cinema. (2021) Weinstock et al, Fordham University Press.]