6. Skratch and the Hallowe'en Turnaround 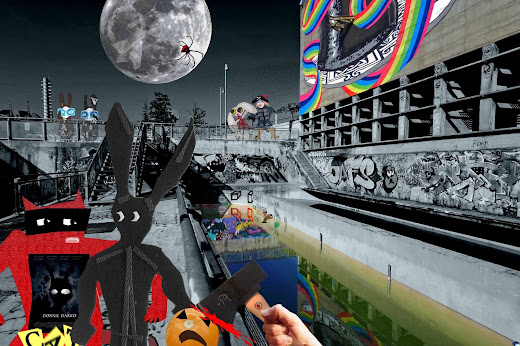 The Bunnyman got up, dusted himself off and hopped up to Skratch. It was Major Spitlove the double agent. He looked nervous but Skratch chortled. "Do you think they bought it?" Spitlove shrugged and looked up at their gang on the bridge. "Looks like it." He lifted the pumpkin head. "My robotic friend Jack sent me a live video feed for the whole affair." "Can I have a copy?" snickered Skratch. Some way off on the bridge - and out of earshot  - the Wabbit smiled and nudged Wabsworth. "Do you think they fell for it?" "Looks like it," giggled Wabsworth. He nodded vigorously. "That radio axe was a great idea." The Wabbit relaxed. "We can have our party now." They made their way down the clangy iron stairs. Skratch was still smiling. He gave Spitlove a hug. "Now our trick is over it's time for our party." Lapinette called down from the bridge and her voice was frantic. "Look out! Look out for the Hand!" The Wabbit merely grinned. "What trickery is this?! An axe struck the pumpkin squarely above the eyes. It squeaked and bled viciously. "Aaaagh!" shouted Spitlove. He dropped the pumpkin and kicked it. It flew in the air. The Wabbit dived forward to catch it, but squashed it flat. "Yuk, it's all over my fur," groaned the Wabbit. "The Wabbit fell for it!" laughed Lapinette. Jenny rocked back on her boots and tilted her pirate hat. "That be a hat trick."
at October 31, 2018