6. The Wabbit and the Holy Roller 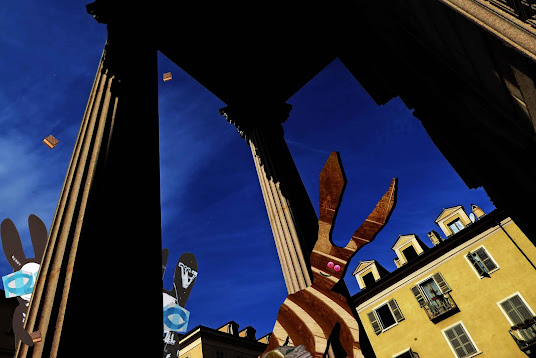 The Wabbit and Wabsworth caught up with Jumpback Jack at the big church on the corner. Jack was heading in and his head was bowed and on his lips was a prayer. "Can you hear him?" asked Wabsworth. The Wabbit flipped his super ears skyward. "I can hear him. Can you hear him?" "He said he was in fear of his enemies" replied Wabsworth, "and he goes to worship in fear." The Wabbit listened carefully. "Fear of the righteous love of Chocolate? Did I get that right?" The Wabbit saw something and he grabbed it. "Chocolate rain," he growled. Wabsworth hissed. "Don't eat it and whatever you do, don't lick your paw." The Wabbit cast it on the entrance and rubbed his paw up and down the pillar, but he had to hide as Jumpback turned. "It's a sign! I will not perish." He dropped the bag and waved his paws in the air. Wabsworth reached out for the bag but Jack stopped waving and knelt beside it. He looked inside and smiled in a sickly manner. "I will share the merits of the blessed." He rose, hugging the bag to his chest. Then he bowed his head and strode into the church. The Wabbit scowled at Wabsworth. "Batch 10? Explain. What do they do?" Wabsworth shrugged just like the Wabbit. "Seized from the Agents of Rabit. It was under analysis." "And?" growled the Wabbit. Wabsworth cast a glance at the open door of the church and pointed to the end of the aisle where Jack knelt before an altar. "It makes you holy."
at October 08, 2018