4. Skratch and the Graffiti Warning. 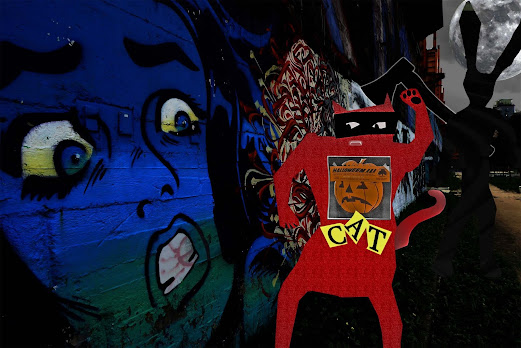 Unaware of the search for the severed head, Skratch arrived to scout the usual Hallowe'en location. This year he had a Bunnyman surprise up his sleeve and he wanted to set the scene. Dusk fell on Pluto Park. The sky darkened as he made his way along the wall that skirted the old abandoned power station. The graffito lady looked startled as she always did - but tonight she seemed more startled than usual. He thought he heard a noise behind him and he turned. There was nothing - just a wolf moon making its way across the evening sky. "Skratch beware!" said a voice.  Skratch looked the mural up and down. "Beware what?" he murmured. "Beware the Bunnyman." It was a whisper, barely audible, and it oozed from bricks and mortar to rustle the dark grass behind him. Skratch turned again. Nothing. His fur shivered. "The Bunnyman is an urban myth," he said to himself. "Legend," said the wall. Skratch shrugged but his shrug was dutiful. The wall spoke again. "By the crumbling of my bricks and mortar, the Bunnyman aims to make you shorter." Now Skratch's ears made out the steady march of footsteps. In the moonlight he glimpsed a flicker of a shadow shape drawing closer. He relaxed his muscles, then tensed. Just when the shape poised over his head, he sprang in the air. An axe sliced the wall where his head had been. Shards of mortar showered the grass. Skratch leaped atop the wall and raced along it like the fastest cheetah there ever was. "I wasn't planning on a run," puffed Skratch.
at October 26, 2018