9. The Wabbit and the After Effects 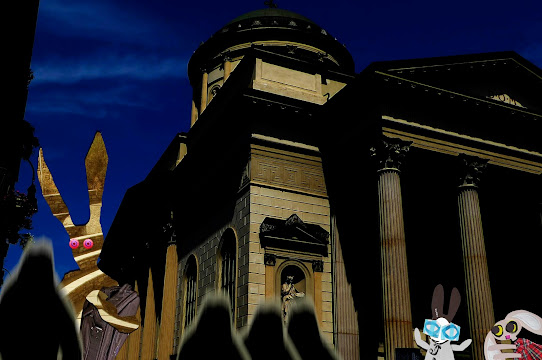 Jumpback Jack strode from the church clutching his original bag with his original beans. The switch had been easy - and persuading Jack he was holy proved easier. The crowd unfroze and rose as one to meet him. The smell of beans drifted from the bag. "That's the odour of sanctity," gasped a figure. The crowd clustered round Jack. At the church door, the Wabbit spread his paws wide and nodded. Lapinette dug him in the ribs. "Did you put something in with the beans?" "Eau de cologne." smiled the Wabbit. Lapinette snorted. "You've had that perfume at least 15 years." "It won't last long," grinned the Wabbit. Lapinette gave him a look. "Unlike the effect of Batch 10 chocolates." "Hmm. Get it all back?" asked the Wabbit. "Except for the ones they ingested." replied Lapinette. Voices drifted in the morning air. "Let's spread word of the holy beans." "Everyone must know." "We'll go on a pilgrimage." The Wabbit and Lapinette kept their eyes on Jack as the crowd escorted him into the distance. "Absolutely harmless," shrugged the Wabbit. He smiled nervously. "What can possibly go wrong?" He had a bit of a think. "Who was supposed to pick up Batch 10?" "I was," said Lapinette, "but someone had moved it." The Wabbit's mind flashed back to his day at the chocolate factory and he clearly saw himself moving sacks around. He gulped. "Some tidy fellow?"
at October 15, 2018