8. Lapinette and the Miracle Brigade 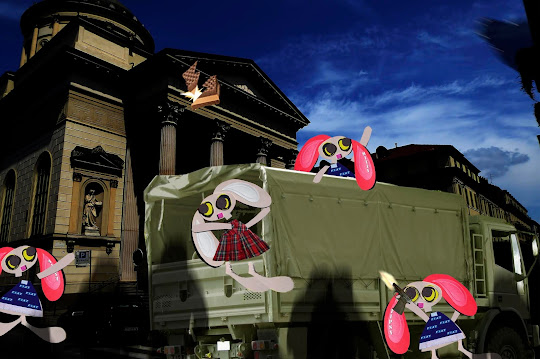 Lapinette and her guard placed the church under lock down. The public was advancing, so they holstered their weapons and shouted. "Nuffing to see here," yelled Tipsy. "Were having an ickle curfew," shouted Mitzy. "Worship the miracle." yelled one individual. He touched the hem of Tipsy's frock. "Ooof," he said as he dropped like a stone, clutching his ankle. "Another miracle," said an onlooker. "Miracle!" echoed the crowd. Lapinette binkied straight into the air to get attention. The crowd gasped in awe. "Spectacular public miracle working," said one. "I'm witnessing visible signs," said another. One by one they delved in their wallets and pulled out money. Tipsy confiscated some of it. Lapinette slapped a paw to her head. "We gotta soup sandwich," she scowled. "Sheep's shiblets," grimaced Mizty. "Holy frijoles," nodded Fitzy. Tipsy gestured to the sky. "Incoming." The crowd gasped as a chocolate dropped from nowhere. The speed of Tipsy's draw would have put Wyatt Earp to shame. Her automatic fired and the chocolate shattered. Fragments showered everywhere and the crowd fell on them and ate them. Then everyone remained on their knees, heads bowed. They were completely frozen. Lapinette turned to look at the Church. Her ears pricked up. She could hear faint strains of the Wabbit chanting something in Latin. She turned to Fitzy and sighed. "He's starting a Homily." She looked around the frozen figures. "Better get them blankets."
at October 12, 2018