7. The Wabbit and the Holy Orders 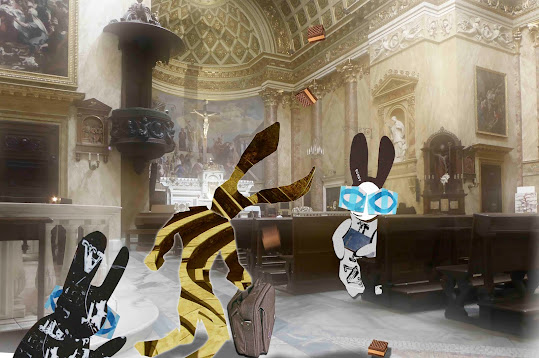 The Wabbit made short work of the sacristy door. He grabbed the first vestments he saw and plucked from his fur an old family bible. Jumpback Jack bowed his head as the Wabbit entered. The Wabbit stood silently for a considerable time. Jack became fidgety and he clutched his bag close. The Wabbit lifted a paw in greeting. Jumpback Jack released his grip and rested his bag on the floor. The Wabbit silently blessed it and chanted a few Latin words he learned at school. "I come to atone," gasped Jack. The Wabbit waved his bible at the bag. "Relinquish all material things and embrace the spirit gifted to you." Jack placed his paws together in supplication as his head sank to his chest. "Are you feeling peaceful?" asked the Wabbit. Jack twitched and trembled, then became as still as stone. Wabsworth stretched out a paw to grasp the bag, but just as he got in range, Jack grabbed it and clutched it to his chest and yelled. "The bag is the Tabernacle of the Holy Beans." Wabsworth crept forward again, but something fell and hit the bag. Then another. Jack gazed at the chocolates as they fell and he spread his paws wide and touched his head to the floor. "It's a miracle!" The Wabbit waved Wabsworth back and spoke in an authoritative voice. "Miracles require a certificate."
at October 10, 2018