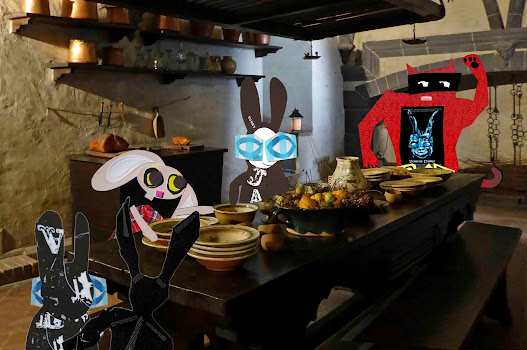 Wabsworth and Major Spitlove the double agent were last to arrive at the Adventure Caffè. "The staff is on vacation," said the Wabbit. "We have to serve ourselves," added Lapinette. Skratch rubbed his paws in glee and made for the kitchen - but the Wabbit called him back. "Not so fast, Skratch!" Lapinette shouted. "What was that for a sort of adventure we just had" Skratch purred politely. "Prolonged instantiation." He vanished into the kitchen and returned smiling. "There's enough food in the kitchen to serve an army." "What about our adventure," sighed Lapinette. Skratch nodded. "Instances of general concepts which we exemplified." Wabsworth chipped in. "Meaning can only be derived through continual instantiation." "Aha!" chortled Lapinette, "therein lies the experience of the constitution of identity." Major Spitlove laughed. "Which in my case is difficult." The Wabbit rapped on the table. "Our Hallowe'en adventure foregrounded psychological projections. It was the shadow of the shadow - forever dancing to and fro." "But what about the Bunnyman? said Wabsworth suddenly. "There was no Bunnyman," shrugged Lapinette. "I saw him, he was watching us," said Wabsworth. "Looking for ideas, I guess," smiled the Wabbit. From under the table a sudden crash rattled the crockery. A louder crash made the Wabbit's teeth chatter. A third detached a piece of fruit from the bowl. It rolled and dropped into the Wabbit's lap and he leaped in the air. He looked around. Everyone shook their head. The Wabbit's eyes were everywhere but saw nothing. He shrugged. "See you next year, Bunnyman."


["Instantiation of meaning is always in the experience through which individuals constitute their identity."  Mihai Nadin]
at November 05, 2018