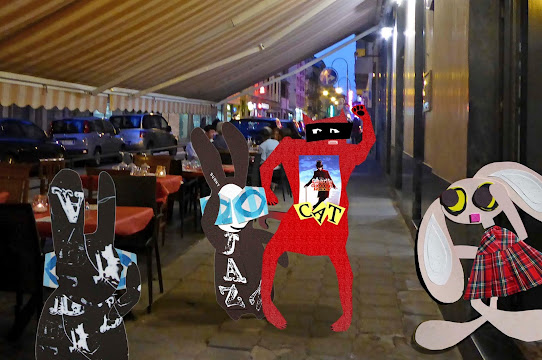 Lapinette emerged from the designated caffè just in time to see everyone converge. The Wabbit and Skratch were together and they looked excited. The Wabbit saluted cheerfully. Wabsworth followed suit. Skratch raised a triumphant paw and yelled, "What was that for a sort of Adventure?" "Let's get the drinks in first," shouted the Wabbit.  He grabbed Skratch playfully around the leg. Some diners looked round. "Have some decorum," grinned Lapinette. "Fac me cocleario vomere," said the Wabbit. He took a seat and tried to behave. "Comedy is a very serious genre of adventure," remarked Skratch, "It's ultimately the discourse of credible confusion." "Indeed," said Wabsworth, "the Adventure had a singularity which questioned the fragile certitudes of accepted practice." Skratch purred and nodded. "We are all ravaged by the jagged mechanisms of thought." There was a pause in conversation. It was Lapinette's turn to think about the Adventure. "Miracles are mostly conjuring tricks. Jumpback Jack fooled himself."  "The essence of comedy," agreed Skratch. "Jack falsely believed himself holy - and others believed his falsification." The Wabbit was getting thirsty. "Hilarious," he said, "shall we conjure up some aperitivi." Lapinette inclined her ears and a waiter emerged. The Wabbit gasped. "How do you do that?" "Magic," said Lapinette.
[Fac me cocleario vomere. Spoof Latin. Gag me with a spoon.
I'm indebted to Annette Michelson for her foreword to Hollis Frampton's Circles of Confusion Visual Studies Press]
at October 17, 2018