2. The Wabbit and the Helpful Spider 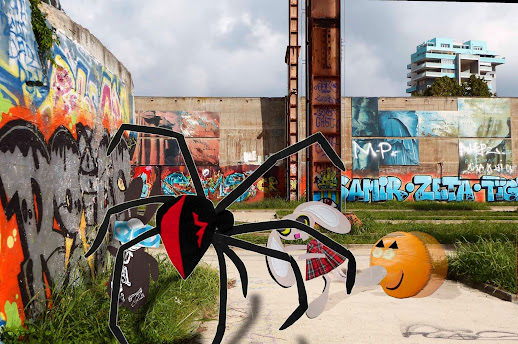 The Wabbit and Lapinette decided to hunt for the missing head - but whichever way they headed the giant pumpkin followed. No matter how hard they discouraged it, it stuck to them like glue. "It only wants attention," scowled the Wabbit. Lapinette tapped it with her foot. It squelched backwards and then returned to where it was. The Wabbit snorted and turned to examine graffiti. "Perhaps the perpetrator left a secret message." "Why would he do that?" asked Lapinette. "It's the sort of thing they're known for," shrugged the Wabbit. A shadow fell across his face and he looked up to see Marshall Duetta Spyder. "Can I help, Commander?" "Duetta!" laughed the Wabbit, "We're looking for a head. Any ideas?" Marshall Duetta rattled her legs. "Who's head?" "If only we had the head," sighed the Wabbit, "then we might know who it was." Marshall Duetta hissed and rattled. "Headless corpse eh? Clearly the modus operandi of the Bunnyman." The Wabbit clapped his paws and pointed at Lapinette. "I told you so!" Lapinette jumped up and down and yelled, "It's an urban myth!" Duetta's laughter made the grass ripple. It was then that Lapinette felt a nudge from the giant pumpkin. She kicked it away, then bent to look closely. "Wabbit, did the pumpkin have a face?" The Wabbit's eyes gleamed. "Maybe it's a clue." "Maybe it's a meal," said Duetta.
at October 22, 2018