3. The Wabbit and the Ghost Sleuth 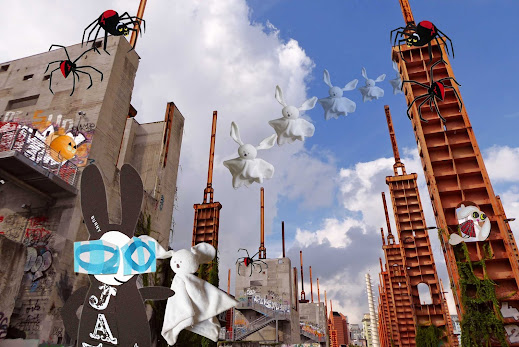 The search for the severed head began in earnest. Duetta's red spiders crawled the towers, while Lapinette climbed onto a ledge and eagle-eyed the area. The Wabbit thought of the words of a favourite detective. “It is the brain, the little gray cells on which one must rely," he said to himself. He settled back and had a think. He shut his eyes. "One must seek the truth within, not without," said a ghostly voice. "Quite right," thought the Wabbit. An unearthly shove woke him up. "Ghost Bunny!" he yelled. "Sleuth Bunny's my name!" said Ghost Bunny. The Wabbit adopted a spooky voice. "Haunting's your game?" Ghost Bunny fluttered and swooped. "I'm here to paranormally assist." The Wabbit pointed to the giant pumpkin. The pumpkin was wary of the spiders and had camouflaged itself against graffiti. It stared down from a balcony. He made a face at the pumpkin. The pumpkin made a face back. "Can you get rid of that pesky pumpkin?" groaned the Wabbit. "I'm a ghost, not a bouncer," shrieked Ghost Bunny. Without warning, she shot in the air and fluttered down. "I'm concentrating. I'm picking up vibrations." She let out a terrifying yell. "I see an axe. He did it with an axe." "Who did?" asked the Wabbit. "The Bunnyman!" screamed Ghost Bunny, "I can see the axe rising and falling." "Can you see the victim's head?" asked the Wabbit. "I can see something rolling into the distance," screeched Ghost Bunny. The Wabbit waited. "I hear it shouting," moaned Ghost Bunny, "shouting its head off."
[The reference to grey cells is made by Hercule Poirot in Agatha Christie's "Death on the Nile" (1937).]
at October 24, 2018