5. Skratch and the Shooting at Pluto Park 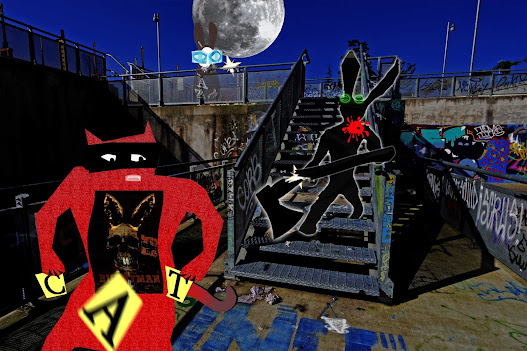 Skratch was fast but the Bunnyman was faster. Skratch arrived at the Hallowe'en venue with his pursuer right behind him. The Bunnyman stood at the top of the stairs, swinging his axe from side to side as he recited a list of his 500 victims. Skratch prepared for combat but the list was so long, he began to feel numbed. The Bunnyman lurched down the stairway and with each step he let his axe drop on the metal treads. Hideous clangs rang out across Pluto Park. Peering out the corner of one eye, Skratch saw vague movement on the bridge. He hoped it was the Wabbit, so he stayed silent and tried to distract the Bunnyman. He yelled out. "That's a load of piffle! The Bunnyman is all discredited now." Sparks flew as the Bunnyman's axe hit the rails. "I'll chop off your cat head and stick it on a spike!" A silence followed. Someone shouted from the shadows. "Drop the weapon and put your paws on the rail." "More victims," snickered the Bunnyman. He lifted the axe and threw it. Skratch leaped out the way. A shot rang out, followed by another. The axe shaft splintered. The Bunnyman looked at his chest, then sagged and keeled over. With one leg caught in the stairs, he was trapped. His breath was shallow now. "I'll be back," he muttered. It was his last gasp as he slumped and lay prone. Skratch shouted to the Wabbit, "Please tell me this is a prank." The Wabbit blew smoke from the barrel of his automatic. Moonlight glinted from his 28 teeth. "Just a lark in the park."
at October 29, 2018