3. Lapinette and her Personal Guard 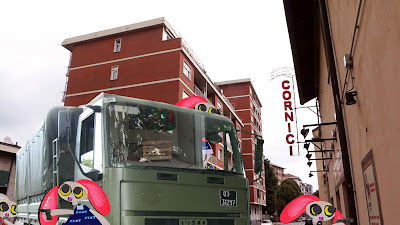 Tipsy lurched from the truck and waved an automatic. No-one took the slightest notice. It was that kind of day on that kind of street. A few might have seen Fitzy taking a squint through a window but they were well used to squinting through windows. Mitzy stared down the barrel of a bump-stock Makarov. She'd never tried it but it but seemed like a day that she might. Fitzy murmured a series of expletives that few had ever heard before. "It's our chocolate rabbit," she growled. Tipsy sprawled against the truck. "What's his game?" Fitzy spoke from the roof of the truck. "Jumpback Jack's his name. Selling's his game." Mitzy drew a bead. "I could take him now." Tipsy scowled. "Stick to the Plan." Fitzy glanced back. "We have a plan?" "Your plan is my plan," whispered Tipsy. "So what's your plan?" asked Fitzy. "My plan is no plan," scowled Tipsy. "Sheep's shiblets!" breathed Fitzy. She had another squint. "Jumpback Jack is trying to sell something to the Wabbit." They waited. "The Wabbit is inviting Jack to sample a chocolate liqueur." Fitzy chuckled. "Jack threw the liqueur back and the Wabbit swapped the bag." Mitzy had a thought. "But what's Lapinette doing?" "I'm behind you," said Lapinette.
at October 01, 2018