2. Lapinette and the Travelling Salesman 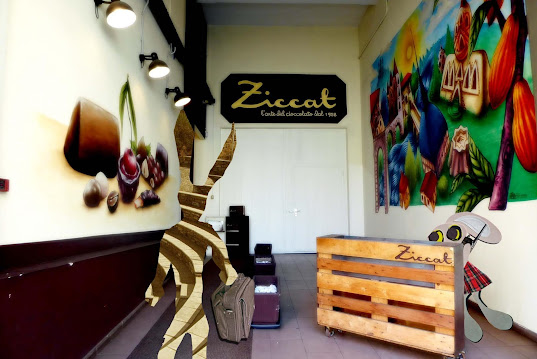 Lapinette's radio crackled but it drowned in the racket from Via Bardonecchia. "Looks like a travelling salesman." Her hiss matched the radio. A bus passed. Inside, the Wabbit brushed one paw down his fur and smiled. "Has he brought his wares?" Lapinette scanned the salesman. "He has a brown new bag." "Papa," muttered the Wabbit, "What's he like?" Lapinette scanned the salesman. "He's chocolate fancy and the colour of beans." The radio whined. "He don't seem cheap," said the Wabbit, "Let's see if he's shy." Lapinette carefully placed her radio down but she left it on. She raised her paws and leaped out from behind the packing case. "Dig our crazy chocolate scene, we do chocolate and we do it mean." The Salesman stepped back. "I'm not a customer," he sneered: "I'm Jumpback Jack." The Wabbit heard everything and he muttered to himself. "Jumpback Jack, the bean dealer." Lapinette pounced forward. "I know who you are. I'm hip to the jive." The Salesman waved his bag. "Only Jack has merchandise." A truck drew up with a screech. "They don't grow this stuff no more,"  laughed the salesman. Lapinette pirouetted. "The boss is at the back of the house." The Salesman reached for the door but he turned back. "What you packing, sister?"  "Bump-stock Makarov," shrugged Lapinette. The salesman opened the door. "There's a seller's market for specials."
at September 28, 2018