12. The Wabbit and Dublin Dumpsters 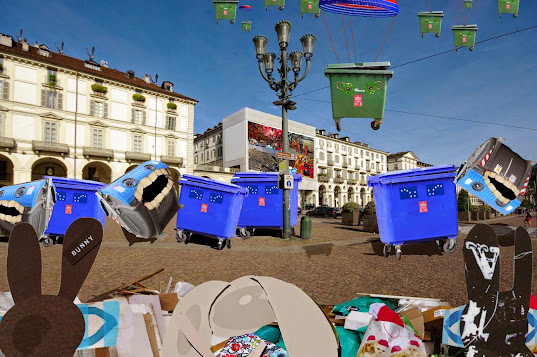 The Wabbit instructed his enemy allies to fall back and then they waited. It wasn't long before they felt turbulence from above. With banshee wails, airborne dumpsters fell like rain and set about the Roman Dumpsters with vigour. Lapinette couldn't resist a wave and she turned to the Wabbit. "Why are there two colours?" The Wabbit grinned. "The Dublin Dumpsters have two units. One will take care of unruly elements and the other will clean up all this trash afterwards." Wabsworth nodded agreeably. "Most effective. But what about them?" The Wabbit glanced up to the rooftops. Agents quickly ducked out of sight and the Wabbit scowled. "They're too early. They'll have to wait their turn." The team watched as one by one the Agents of Rabit left the rooftops. "Do you think they're going home?" asked Lapinette. The Wabbit nodded his head. "Maybe." "Perhaps they came to be in your Museum of Enemies," said Wabsworth. "I doubt that," said the Wabbit. "They'd like to put us in their Museum." Lapinette shuddered to think how that might be and her nose wrinkled. "Agents are most annoyingly persistent enemies." The Wabbit's smile was lopsided. "This whole affair is confusing them." Wabsworth was worrying about something. "What are we going to do with them?" "Nothing," said the Wabbit. "We won't disturb them if they're going home." "And if they stay?" asked Lapinette. The Wabbit's teeth sparkled. "Offer them interesting bait."
at December 01, 2014